Situated in the village of Aberlemno in Angus, Scotland, these stones are really quite something, and well worth seeing if you're ever within visiting distance.

The group consists of five very impressive Pictish carved standing stones. Three of the stones stand beside the B9134 Forfar to Brechin road, within recesses in the dry stone wall. One is in the nearby Aberlemno kirkyard. And one other is on display at the McManus Museum and Gallery, Dundee.

Believed to be mid-9thC in date, this is a magnificent red sandstone cross, standing 7½ft high. It’s one of the finest of all surviving Pictish carved stones.

The cross is only just visible from the road, which is at a lower level than the churchyard.

But up close it gets a whole lot more impressive....

The cross is elaborately ornamented and flanked on either side by zoomorphic figures and intertwined beasts. 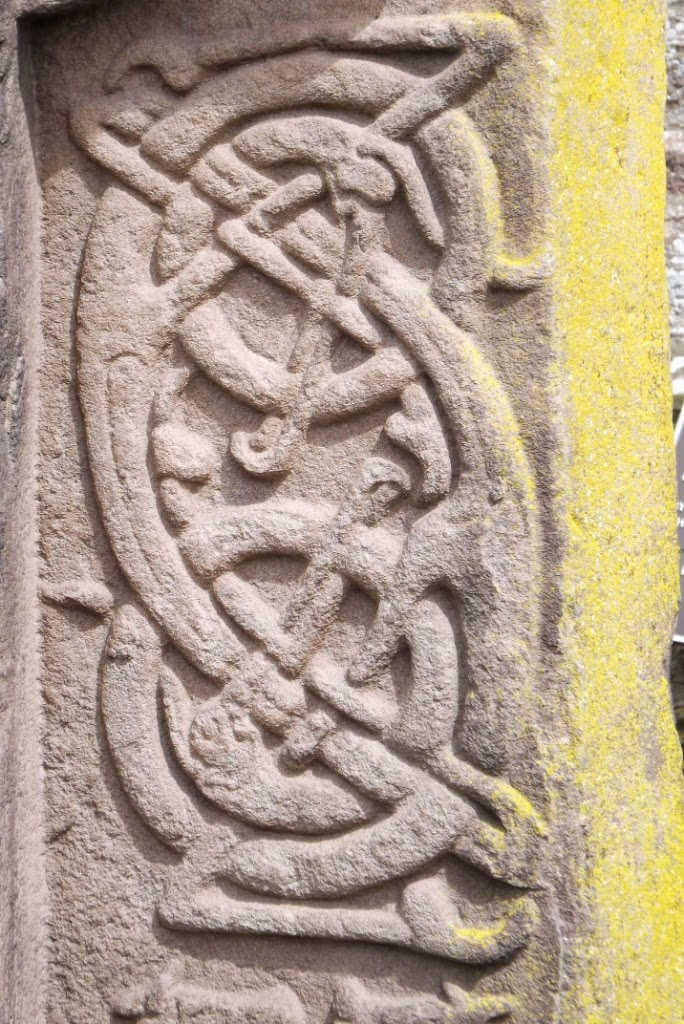 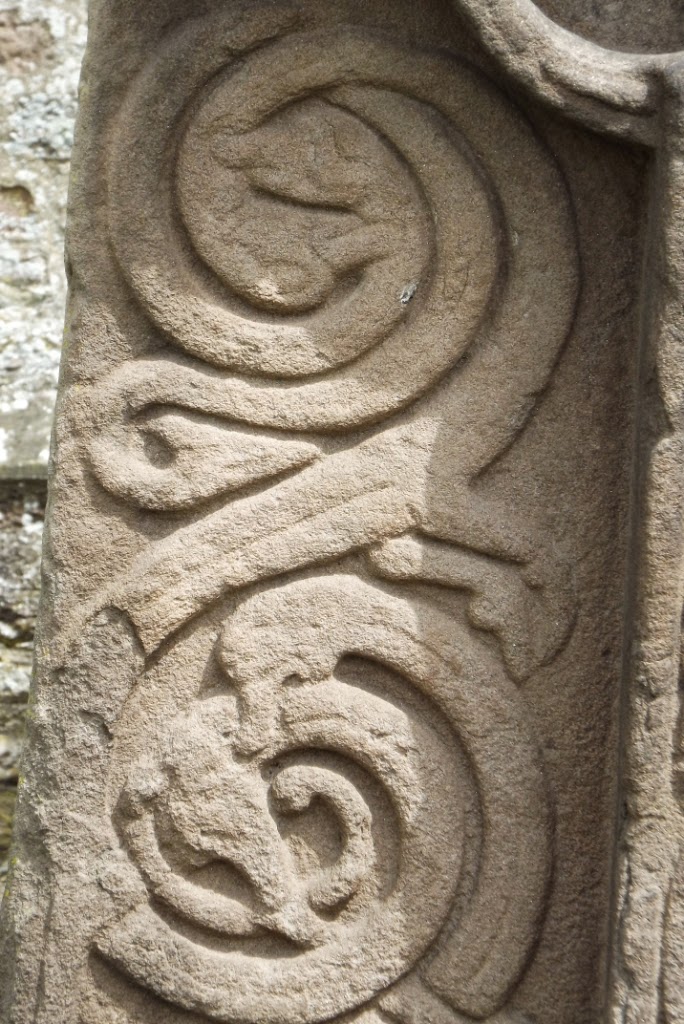 The carvings on the back of the stone appear to be a narrative account of a battle fought between an army of men with long hair (presumably Picts) and an army of men wearing helmets. 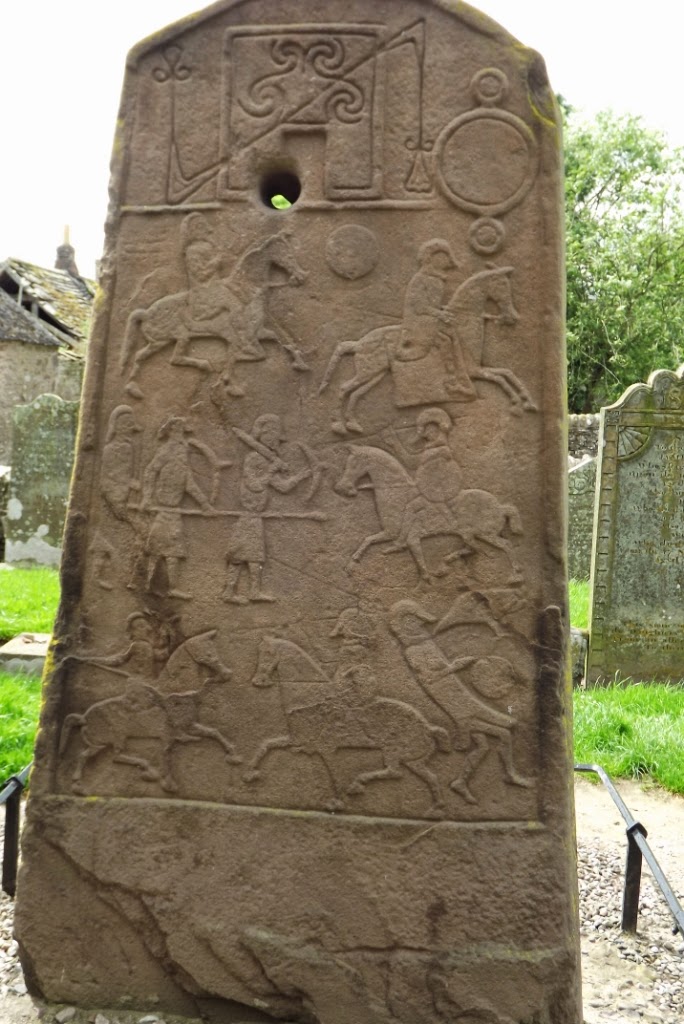 Recounted in 4 scenes running from top to bottom (with the fourth scene being in the far right bottom corner), it is believed to be a depiction of the battle of Nechtansmere, fought in 685AD at nearby Dunnichen. King Ecgfrith of Northumbria was killed in the course of this battle, ending the Anglian occupation of the south of Pictland. The final scene appears to show a slain Northumbrian, possibly King Ecgfrith himself, with a raven pecking at his face - lovely!

By all accounts this battle was one of the most momentous in Scottish history, and if the Picts had lost, Scotland might not even have existed as a nation - everything was at stake.

At the very top edge of the back of the stone you might just be able to make out two confronting dragon-like heads.

What intrigued me most about this stone was the hole that has been bored through it. It reminded me of stones through which people once claimed to be able to see the future. I wondered whether anyone had ever tried it and if so what they had hoped to see. Disappointingly however the hole was made in relatively modern times, in order to make the stone easier to move. I still like my explanation better!

This stone is imposing at over 9ft high.  Badly weathered but still very beautiful, it is a ringed cross, flanked by angels with bowed heads (for this reason this stone is sometimes called ‘The Mourning Angels’). There are also animal figures at the base, too eroded to be identifiable.

The back is difficult to photograph because of its proximity to the dry stone wall that protects it from the field behind - I did my best! It shows a hunting scene with 4 men on horseback, 3 stags and 3 dogs. Above this there are also beautifully carved Pictish symbols of a crescent and V-rod, double disc and Z-rod.

Separate panels at the bottom of the stone depict a centaur (very weathered - you might need to squint and use your imagination) and King David fighting the lion.

This stone is highly eroded. It may bear traces of a curved symbol but it's difficult to make out - I didn't see it.

It was found in the field behind its current position.

The Serpent Stone (Aberlemno I)


This is a truly beautiful stone, also found in the field behind its present position. It bears several Pictish symbols: serpent, double disc and z-rod, mirror and comb.

The back of this stone has prehistoric cup marks near the base, suggesting that it was an earlier monument that the Picts reused.

One further stone is on display at the McManus Museum and Art Gallery in Dundee. It was discovered in 1961, approximately 30 yards from Aberlemno church, and bears some damage from ploughing.

There are 2 symbols on this stone: a horseshoe and a Pictish Beast. No definitive interpretation of Pictish symbols has ever been made, and the Pictish Beast remains one of the most mysterious.

Altogether these are wonderful stones in a beautiful setting. I highly recommend a visit!

Aberlemno is 6 miles NE of Forfar. The Aberlemno churchyard cross slab is easily accessible, with plenty of parking round at the side of the church. The roadside stones are also easily accessible at the side of the B9134 Forfar-Brechin road, and there is easy parking outside the village hall nearby, well signposted. However, to help prevent further weather-damage, the stones are covered with wooden boxes during the winter months (from the last working day of September until the first working day of April)

Please do take care if visiting the stones with young children or dogs, or anyone who might be unsteady on their feet. The B9134 Forfar-Brechin road isn't very busy and has a speed limit of 30mph but there are no pavements. Also, although the verge where the stones stand is not tremendously high, it is quite steeply sloped.

The Last of the Druids: Does the Pictish Beast Symbol represent the astrology sign of Capricorn?