There are places I want to take my characters to. Saturday night pubs in unfamiliar towns, city centres in the wee small hours, late night bus stations. Remote, ruined, derelict sites, unlit back roads and dark, uneasy places. But I'm not always sure I want to venture to these locations myself - not alone.

Of course that's what imagination's for, and there's always vicarious research on the internet. But there are times when I want to find out for myself what a place would feel like on a character's skin. How their footsteps would echo. How the air would taste.


What I really need is a research companion.

Researching alone in isolated locations didn't used to worry me. But I've become disappointingly cautious with age. When I was younger I often trekked out into the middle of nowhere by train or by bus or on foot - sometimes a combination of all three - happily and without a thought. Just me, my camera and a timetable. That was before I had a car, and before mobile phones. When I think about it now, I'm not at all sure it was a good idea.


I travelled alone to all sorts of out of the way places - Roman forts in lonely woods, castle ruins, souterrains, cairns, stone circles. And it was fun. Even when I was scared. Perhaps for the very reason that I was scared. And I'm still convinced that the best way to get the sense of a place - to hear its ghosts whispering - is alone.

There were only two occasions when I wished I had someone with me.

One was a visit to Cairnpapple Hill - a prehistoric monument with a long and complex history. Used as a burial and ceremonial site from as early as 3000 BC, it features pits into which cremated human remains were placed, and a burial mound. At one time the site was surrounded by a henge of upright wooden posts. Basically there were a lot of strange goings on at Cairnpapple over a period of about 1600 years. 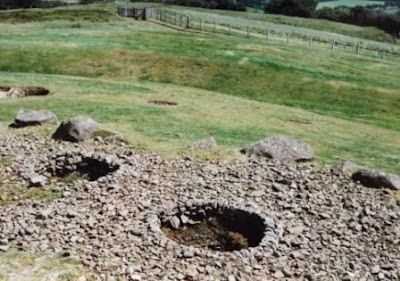 Whether I'd taken a wrong turn that day or misread the map I can't remember now, but having got off the bus on a quiet country road, I found myself on an unexpectedly long walk. Hopelessly lost, I trudged for almost 2 hours without seeing a fellow soul, under a fierce summer sky.

I found my way eventually, but by then I was feeling very far from home, and my mind was clouded, vision blackening in the heat. And what a strange place was Cairnpapple Hill. It crackled with energy. The sun sweltered. Wasps tumbled in writhing balls through the grass. All in all, the atmosphere swarmed with unpleasantness.

If I'd had company, perhaps I would have had a different perception of it. I might not have travelled to such a bizarre and sinister Cairnpapple Hill that day. Who knows. It might have all looked very different if I'd at least worn a hat and stayed out of the sun!

The only other time I was unhappy was at Castlelaw Hill Fort. Again I got off the bus and walked. The day was unseasonably gloomy and overcast.

It didn't seem so bad at first - quite pretty as you can see. But then I dared myself to go down into the souterrain. You might laugh at my horror - just remember I was alone, not a soul was in sight and I had hiked a distance from the nearest road. The hills were silent around me, sky lowering.


There were two things down in that souterrain that I was ridiculously terrified by - a column of mist that was slowly spiralling at the far end of the main chamber (aaargh!) and in a second dark chamber a circle of recently discarded beer cans. I stood my ground just long enough to take a few blurry photos - it was one of the scariest places I've ever been. Sadly I don't have a photograph of the swirling mist or the beer cans - I lost my nerve and fled.

On reflection, I imagine swirling mists must be commonplace in souterrains. Beer cans too. But I wasn't forewarned!

Looking back I'm in two minds about my solitary wanderings. I had a lot of fun. They're happy memories. But I wouldn't want my own daughter trekking off alone without a car or a mobile phone. I wouldn't want that at all. In fact even with a car and a phone.

So my question is how do you travel alone and so have a chance to hear the ghosts whispering -  happily scaring yourself witless - whilst staying safe from earthly dangers? I find I don't have the answer. It's a judgement call.

For my current research though I reckon I need a travelling companion - someone strapping to research those rowdy pubs with.

Anyone for the pub then? First round's on me.
Posted by Fiona Lang at 07:25 2 comments: