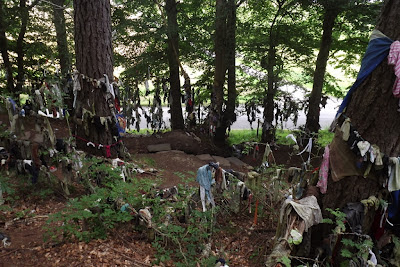 My advice if you're visiting the Clootie Well near Munlochy on the Black Isle in the Highlands of Scotland is not to go alone. Not unless you have nerves of steel. It's damn spooky. 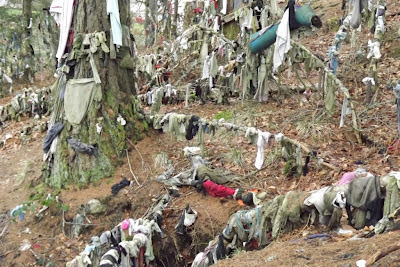 There are other clootie wells around the UK and Ireland, but the one at Munlochy is one of the better known (it even makes an appearance in Scottish crime writer Ian Rankin's The Naming of the Dead, an Inspector Rebus book).

Of ancient Celtic origin, the main function of a clootie well lies in the performing of a healing ritual. A strip of cloth, or 'clootie' or 'cloot', is dipped into the water of a sacred spring and is then tied to the branch of a nearby tree. The cloot may first be used to wash an afflicted area of the body, there may be words spoken, or the well may be walked around a certain number of times. Offerings of coins are also sometimes placed in the well.

Since it's being used to represent an illness, the cloot may be intentionally ugly or unpleasant. Others, left simply as offerings to the fairies, are likely to be more colourful. 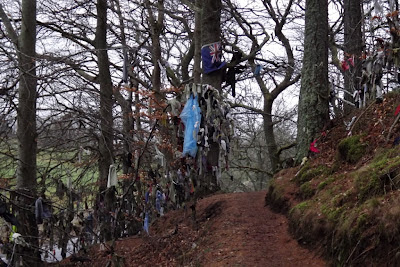 At the Clootie Well on the Black Isle, despite being within sight of the road you're immediately in no doubt that you've entered a place that's distinctly 'other'. There's a claustrophobic sense of stillness, and an unsettling energy. On my first visit I got half way along the path before I turned and hurried back to my car, tripping over tree roots as I went. I have half a notion that the fairies were laughing at me. 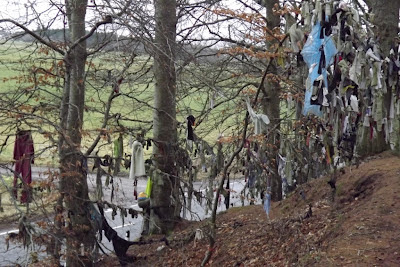 I returned on another day feeling braver. This time I had brought company! 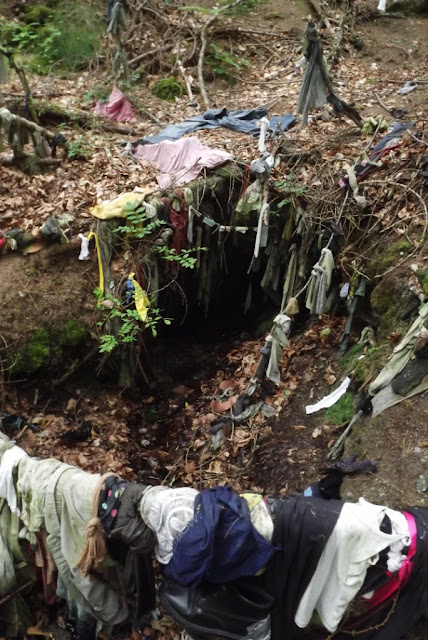 The spring is modest - barely a trickle emerging from the hillside to collect in a small concrete basin. The child's shoe hanging in the foreground of the above photograph will show you roughly the scale.

Rags have been tied throughout a sprawling area of woodland and continue up the side of the hill to a clearing at the top. It's a deeply strange place and one with many aspects. At times it feels comforting and embracing. In its own way it's beautiful. Amongst the Rowan berries, the cloots were as festive as bunting. 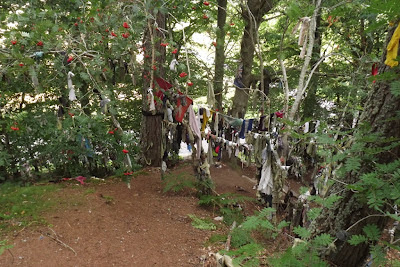 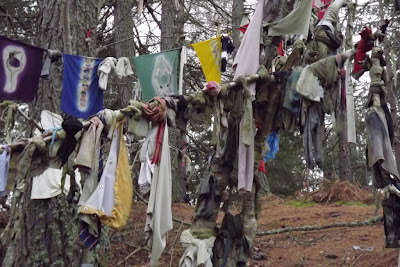 Catch it from another angle though and it's terrifying. A bit like the fairies themselves I imagine! 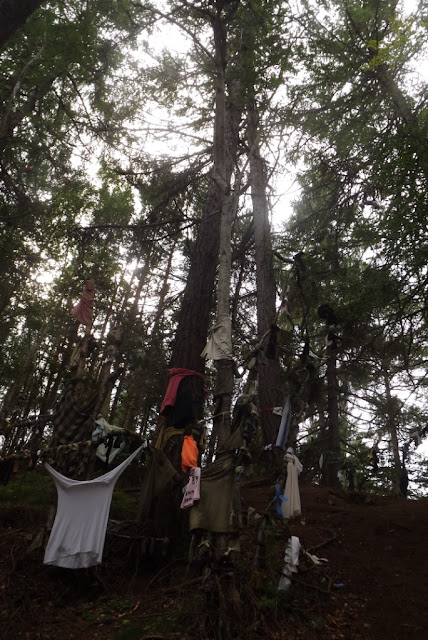 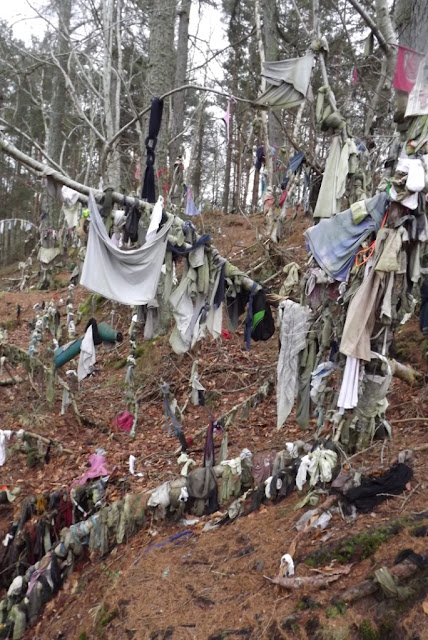 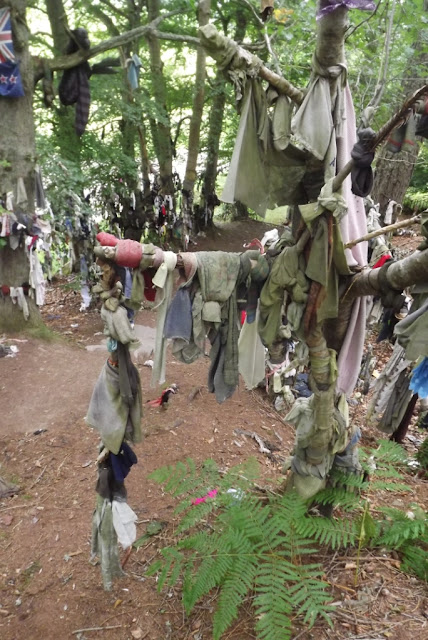 Many of the rags are tied to branches that are not connected to the trees at all but are rather tethered, suspended in the knots of cloth. I wonder whether when the snows come the woods echo with the eerie cracking of overburdened branches, or whether people have tied in the extra branches intentionally. It's difficult to say. Nothing here comes with an explanation. 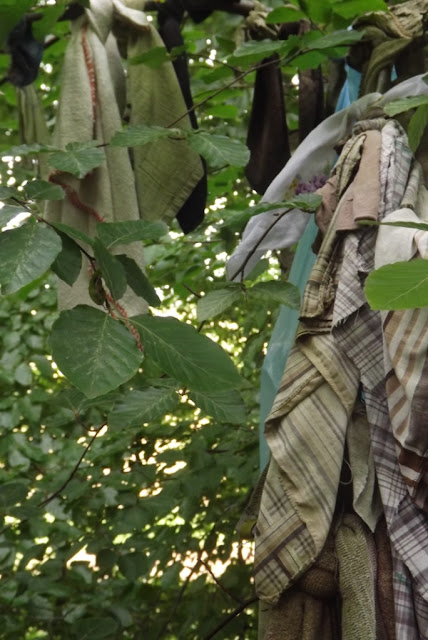 The cloots are most often handkerchiefs, but also flags, towels, t-shirts and sweatshirts, dusters, socks, shoes and even underpants. If for any reason you should ever feel the need to view a whole lot of mossy grey-green underwear this is definitely the place to visit. 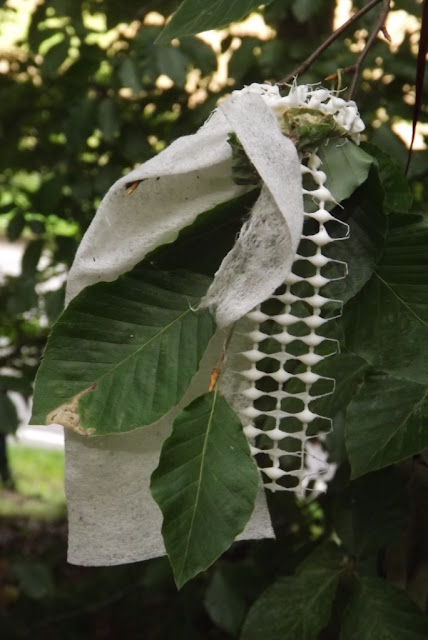 Many of the items tied are synthetic materials or plastic that have little hope of degrading quickly, contrary to the original premise of the workings of the well. 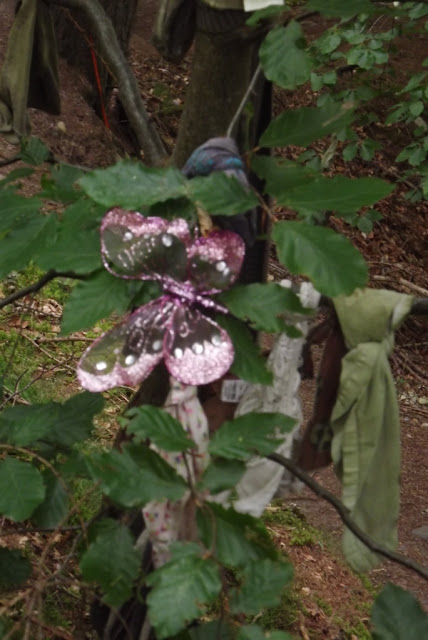 Some items appear to have been left simply as decorative offerings to the fairies. 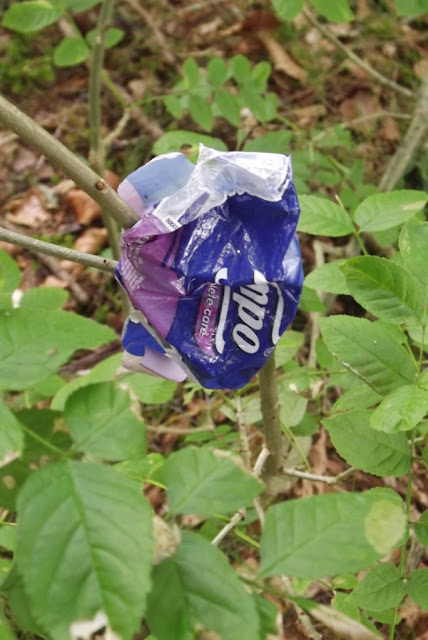 Others are baffling. Did you rub THAT on your afflicted area? 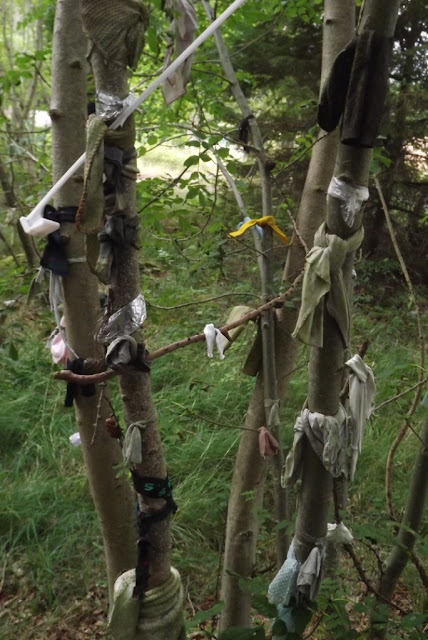 Many are modest, even minimalist. 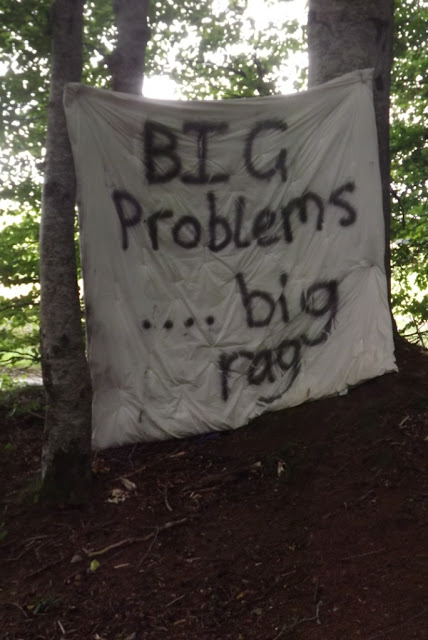 Some people use the well as a kind of memorial garden, leaving RIP messages written in marker pen on cloths strapped around tree trunks. Out of respect I didn't photograph any of these, or the mementos lodged high into the trees that hint at the most terrible of tragedies and losses.

I have no criticisms to make of anyone's use of the well, the choice of rags tied or the offerings left. In a way the Clootie Well is whatever people need it to be. However, it has to be said that the plastic, the trainers, the synthetic fabrics and the metal screws used to fix some of the cloots to tree trunks (why?) are unfortunate in their longevity.

I've occasionally heard mutterings from people who think the site should be cleaned up, and you can't really argue that the place isn't as disgusting as it is wonderful! But clearing the site would be a harsh move indeed.

Perhaps there only needs to be a quiet reminder from time to time that the offerings aren't meant to be permanent. Clootie wells are hopeful places, representing a longing for change. They're about the easing of pain and grief over time, and the possibility of healing. The cloots are meant to fade and disappear - that's where the magic lies. 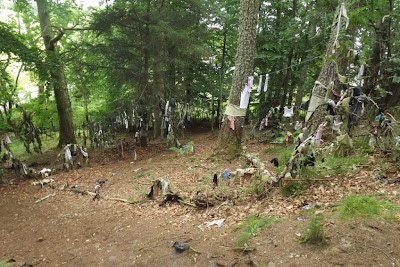 My companion/heebie-jeebie buffer took our visit unexpectedly seriously and insisted that we tie rags ourselves. I didn't ask what her wish was, and similarly my own wish is best kept between myself and the fairies. But I can tell you that it's surprisingly soothing knowing that my little scrap of cloth is there now quietly disintegrating. In fact more than soothing, it's profoundly satisfying.

(My cloot appears in one of the above photographs, as anonymous as all the others.)