Before I was a writer, I was a painter. And I was a painter who never sketched. Well, hardly ever. I envied people who did, but I was worried by that rush to commit an idea to the page. To throw it out there with such abandon. Why would I want to make preparatory sketches when I had the whole image sitting perfectly in my mind's eye anyway? I wanted to guard the clarity of my inner vision and save it, untouched, for the finished work.

Artists, eh? In retrospect it was most likely an anxiety issue.

Well as a writer I've finally had to learn how to sketch. After all, a novel is HUGE.  It's so big you can't even see it all at once, however far back you stand. You can't hold it all in your head. Just not possible.

When I started writing seven years ago, I muddled around giving my first novel space to grow. I couldn't have done anything else - I didn't know what I was doing. I let it find its own shape in its own time, unrushed. And then I pulled it together in the rewrites, by which time I'd learnt a lot more about the shape it needed to be. And about writing in general.

Starting a second novel feels very different. I actually have an idea of what I'm doing this time. I know how to write a synopsis (ooh, that's a painful learning curve) and writing one for my new plot immediately sorted out an issue that had been tripping me up. I hadn't been able to see what the problem was, but it turned out to be as simple as a location that didn't work.

Making a plot plan was even more helpful. I'd imagined that it would be a huge task, like solving a vast and fiendishly difficult sudoku. I thought it would take months of mind-bending calculations, scribbled notes and despair. Actually it turned out to be fun and very straightforward. It took me 2 weeks. And that was only because I was dawdling. 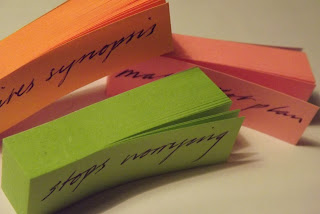 Everyone will have their own preferred method of making a plot plan. I decided to use sticky index markers. They're easy to reposition, and a convenient way to colour code POVs. I wrote my plot points on the markers and stuck them onto 4 A4 sheets of thin card. Where there were 3 or 4 key events in the same chapter, I placed them in a row.


Here's how the plot plan looked in progress. 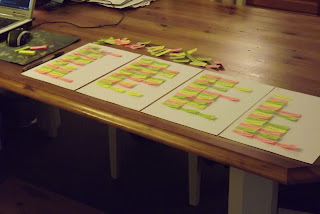 It was immediately obvious that I was missing a character. There was a character-shaped hole. I'd have figured that out eventually somewhere down the line, but the plan made it visible straight away.

I also wrote a plot outline.

Of those three things - synopsis, plot plan and plot outline - I'd have to say that I found the plot plan by far the most useful. But each was invaluable and helped to clarify the others.

Will the finished novel be very different for having been planned out? You know I'm not so sure it will be. I think it'll arrive at much the same place, just a hundred times quicker. Well okay maybe it'll be a more handsome beast and have muscles in all the right places. I hope so.

You know what? Sketching's fun - it didn't hurt at all. My inner vision is intact and even enhanced. And I'm so relieved to not be trying to hold a whole novel in my head anymore.
Posted by Fiona Lang at 08:59 4 comments: