The Hermit of Kinpurney Tower

According to a disturbing Scottish legend, a young poacher by the name of David Gray lost his youth, his health and ultimately his life in a bleak and horrifying act of bravado. All for a wager of £100.


He agreed to be locked in Kinpurney Tower for seven years. Another version of the story states that it was for a year and a day. Whichever it was, it was for too long.

The hermit of Kinpurney Tower succeeded - he won the wager. But by the time he was released he was in a desperately frail state. All those who came to witness his victory were shocked to see that his hair was now waist-length and grey, and his fingernails were so long that they were like a bird's talons. He appeared to have prematurely aged and, most dreadful of all, he had lost the power of speech and was only capable of grunting.

Though he was put in the care of doctors in Dundee, the young man died shortly after leaving the tower.

No one would ever know for sure what exactly had happened to him in the tower. What secrets had Kinpurney Hill muttered to a soul in solitude? What eerie songs had the wind wailed through the long dark nights? And what phantoms had invaded his mind?


The answers would have to be left to their - and to our - imagination. 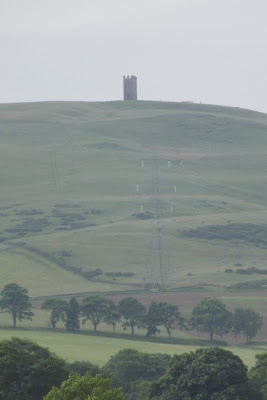 Many of the details of the story are unclear - the year it's supposed to have taken place for instance, and whether David Gray had contact with anyone during his incarceration. Was he free to come and go from the tower or was he locked inside it? Why did no one try to rescue him?

And of course there's the most important question - did David Gray, the Hermit of Kinpurney Tower, ever exist in reality? Perhaps after all it’s just a story.

A version of the legend was printed in the Kirriemuir Free Press in 1918, and reprinted in September 1953 - it gives his stay in the tower as seven years. Another version, which says it was a year and a day, was a re-telling by Colin Gibson in the Dundee Courier of 28th March, 1970. The legend gets another very brief mention in the Readers Digest 'Folklore, Myths and Legends of Britain', 1977. And it also appears in 'Newtyle: A Planned Manufacturing Village' by William Murdoch Duncan, published by the Forfar Historical Society in 1979.

I can't tell you what truth there is in the tale, if any - I can only present it to you as a legend. It may be a real event embellished, or it may have been entirely invented. It feels true though, as all the best stories do. What I can tell you for sure is that there’s something unnaccountably forlorn and forbidding about the tower on Kinpurney Hill.

Just 20ft by 30ft, and 40ft tall, originally it had a slate roof and a wooden floor, a fireplace and a small alcove cupboard. With walls 3 feet thick it should have been a cosy enough refuge.


Roofless since 1840, and for a long time derelict, Kinpurney Tower is anything but cosy. Perhaps it’s those rows of blind windows. Or the wind winnowing through the dark, empty doorways. Or just the unutterable sense of desolation. Even on the sunniest of days, it's not a place in which you want to linger for long.

The surrounding landscape is beautiful - as soft and leafy and sweet as the raspberries and strawberries that the area is famous for. The views are panoramic - across the Strathmore valley to the Grampian hills, and to Dundee and across the river Tay to Fife. The remains of an iron age fort - once an ancient signal beacon station - ring the tower.

One solitary larch tree grows on the summit - a descendant of another that stood on the spot before it. All around are the whisperings of nature, in the swaying of the grasses and the distant rippling of the barley as the wind slowly chases itself in circles.


On Kinpurney Hill you feel on top of the world.


As a poacher, David Gray should have been in his element, having as he did the necessary skills to make sure he didn't starve. And yet somehow he still withered away to a shambling wreck. Did the life and strength ebb out of him so gradually, so insidiously, that he didn't notice that his chance to save himself was passing and being lost? Did he die from just not knowing when to give up?


The tragedy of the story is that he must have believed that his suffering would be worth it.


It's interesting to note that 1918 may be the first trace of the legend in print. As the nation struggled to comprehend the terrible losses of the First World War, was this exactly the kind of story to catch hold in the local consciousness? Could this, after all, be the origin of the legend - did David Gray simply represent the bitter sadness of a victory that had cost too dear? Whether the legend had previously existed or not, this horrifying story of the pointless waste of a young man's life surfaced at a time when it must have particularly resonated.


Just a fireside tale perhaps, but a haunting one.