Smoo Cave - Gateway to the Otherworld ... 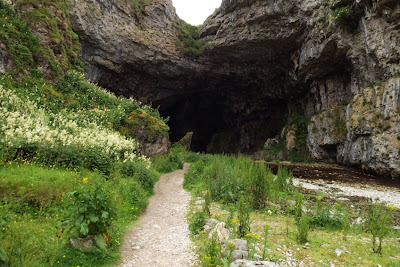 Near the village of Durness at the hauntingly beautiful far North West corner of mainland Scotland lies Smoo Cave, the largest coastal cave in Britain and also one of the most spectacular. The Rock Doves that nest in its high upper nooks and crannies must be quite used I suppose to the steady stream of visitors it attracts - around 40,000 a year - and to their echoing shrieks. 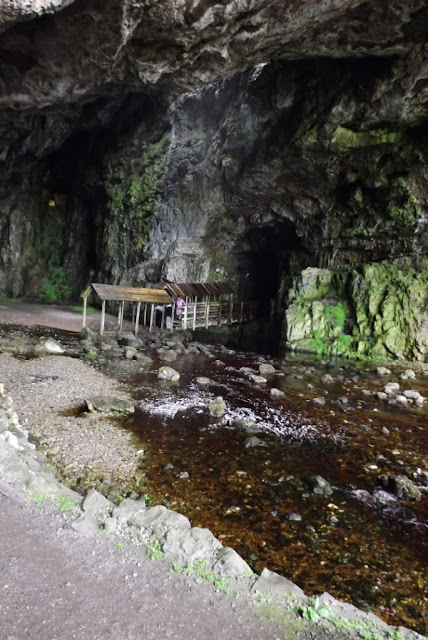 I’m not generally one of life’s screamers, but I screamed in Smoo Cave – it was impossible not to. In the darkness, the volume of noise from the waterfall was overwhelming, and terrified screaming was the inevitable involuntary response! 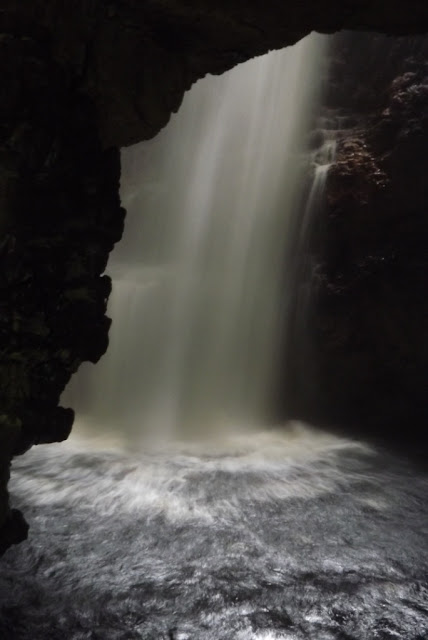 On the day I visited, the waterfall was in particularly fine, thunderous, drenching form and the water was too high for the boat trip into the third chamber. 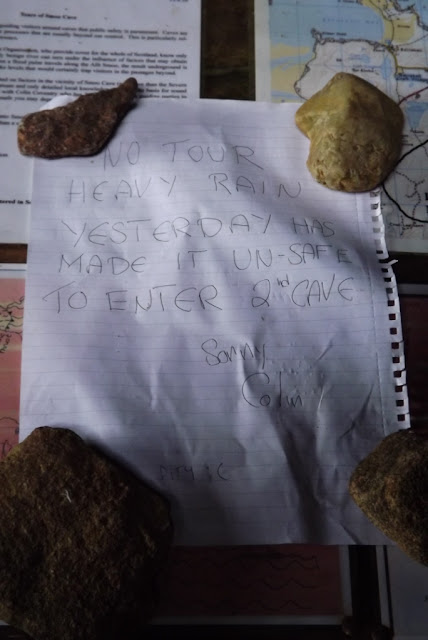 Perhaps on another visit I’ll take this short boat trip across the pool and under a low arch of rock that leads into the third, otherwise inaccessible chamber.

Sir Walter Scott, describing his visit to Smoo Cave in 1814 and his own boat trip into the third chamber, wrote that the effects of his lamp on the dew covered stalactites were as ‘the effect of ten thousand birthday candles. The cave was covered with stalactites and stalagmites. A water kelpie or an evil spirit of aquatic propensities could not have chosen a fitter abode and to say the truth I believe at our first entrance and all our feelings were afloat at the marvelling of the scene the unexpected splashing of a seal would have routed the whole dozen of us. Impossible for description to explain the impression made by so strange a place.’

A longer, quite wonderful, account of his expedition into the cave ('Memoirs of the Life of Sir Walter Scott' by J.G. Lockhart, Diary Vol.4, 19th Aug, 1814) can be read HERE. 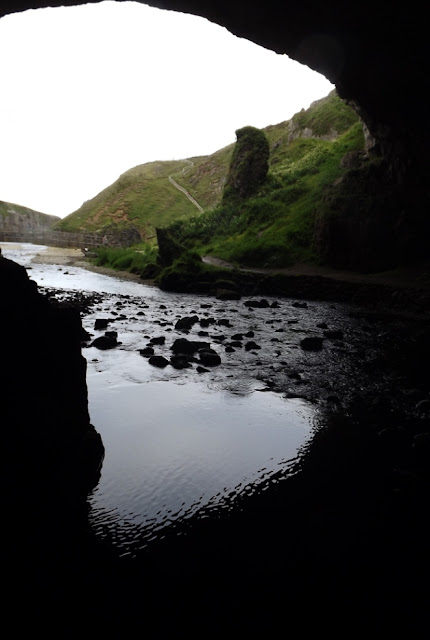 Legend has it that Smoo Cave is a gateway to the Otherworld – or into the faery realm – and that it's guarded by spirits. And indeed, quite fittingly, a pothole in the third chamber leads no one knows where. Divers have only ever explored the first 40m of it because a fine, peaty silt quickly reduces visibility to zero. The cave system may well extend hundreds of metres further into the cliff. 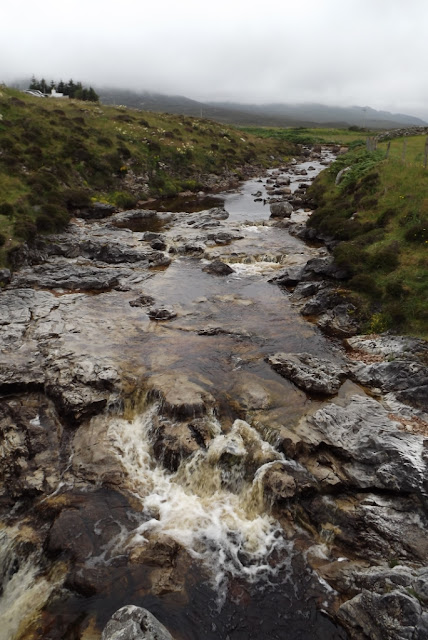 Smoo Cave is unusual in having been formed by the action of both fresh water and the sea. The peaty waters of the Allt Smoo flow off the moors, tranquil until they vanish into the darkness of a gaping sink hole. 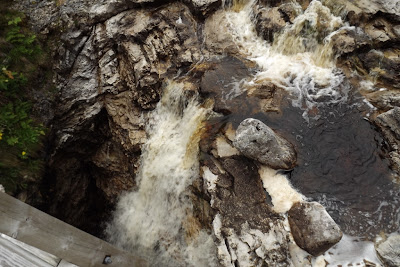 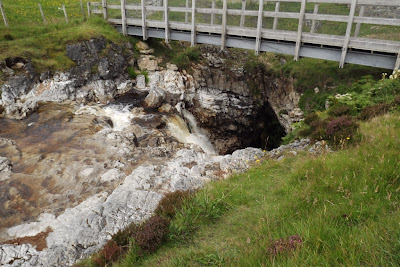 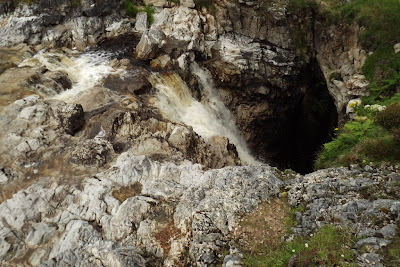 The stream plunges 25m, hitting rocks as it thunders into an inky black pool in the cave below. 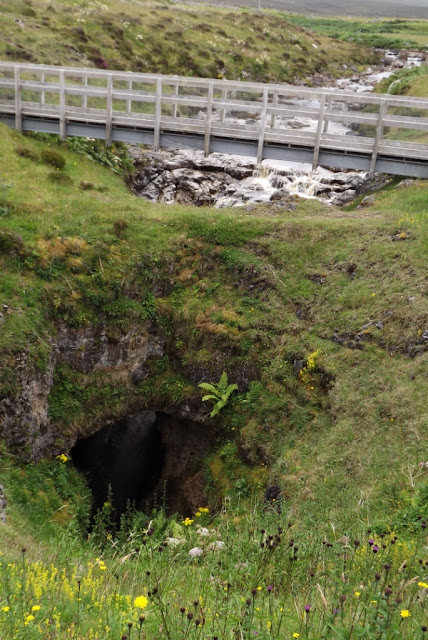 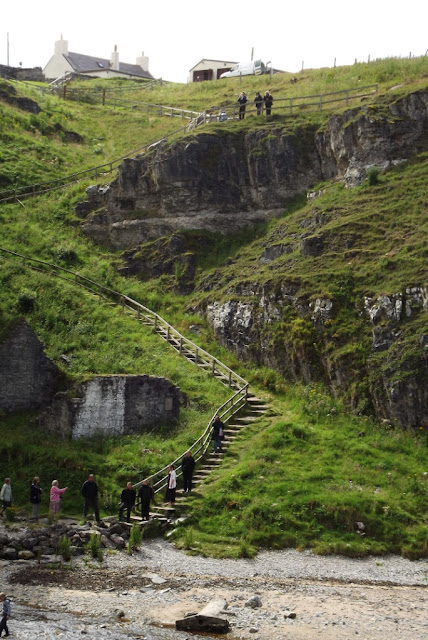 Steps lead down to the cave entrance - not as daunting on the way back up as they look as they’re broad enough to allow plenty of space to stop and catch your breath! 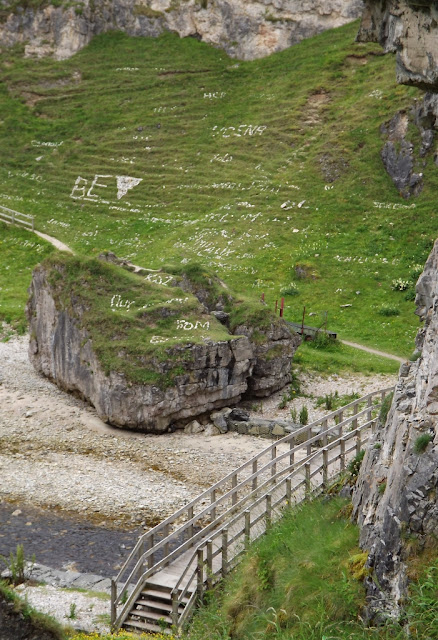 From here there’s a fine view of the banks of the inlet, where visitors' names have been spelled out in 'graffiti' laid out in white stones taken from the beach. 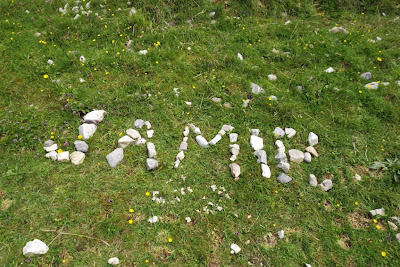 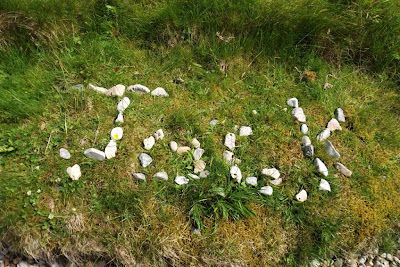 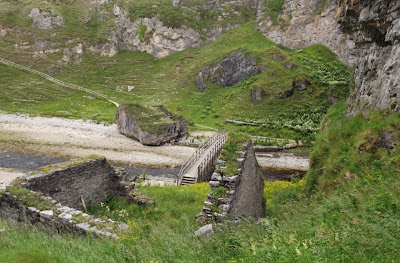 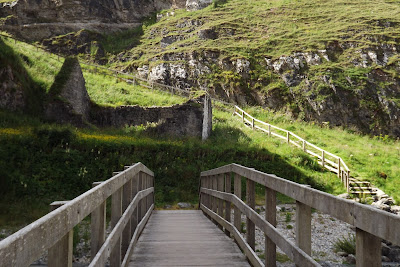 At the foot of the steps are the ruins of a stone cottage, thought to have been built by an 18thC Orkney merchant builder. He traded out of the inlet while building nearby Smoo Lodge, and is said to have employed local women to carry sacks of meal up the cliff, paying them with oat biscuits. 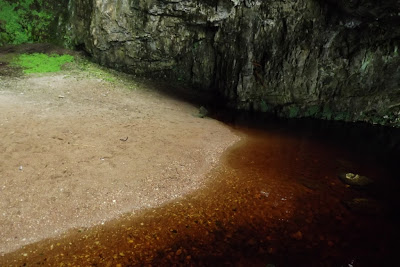 Smoo Cave continues to grow deeper into the limestone cliff - the sea laps at its back wall, though only now at times of unusually high tide. 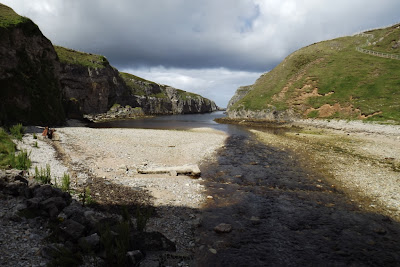 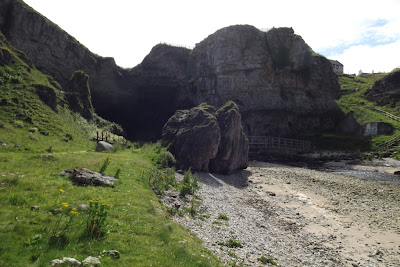 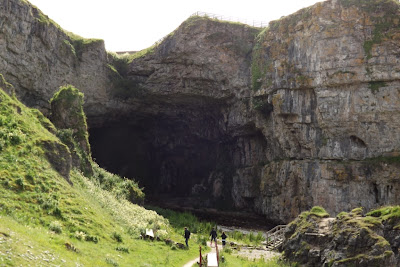 A narrow inlet has formed as the roofs of a series of progressively deeper caves have collapsed. Eroded pillars of rock which once supported these long-vanished earlier versions of Smoo Cave still remain. The cave entrance is now 600m from the sea, and it’s impressive. At more than 15 metres high, it’s the biggest entrance of any sea cave in Britain.

A 360˚ view of the cave entrance can be viewed HERE 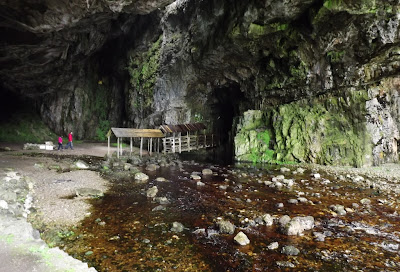 The first chamber of the cave is more than 60m long and 40m wide. A wooden walkway leads from here into the second (scream provoking) chamber. 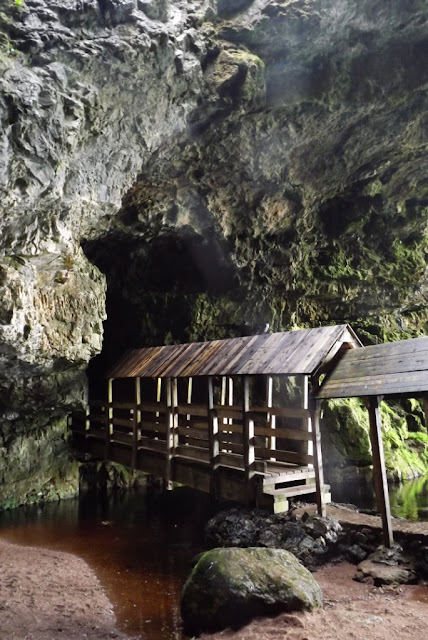 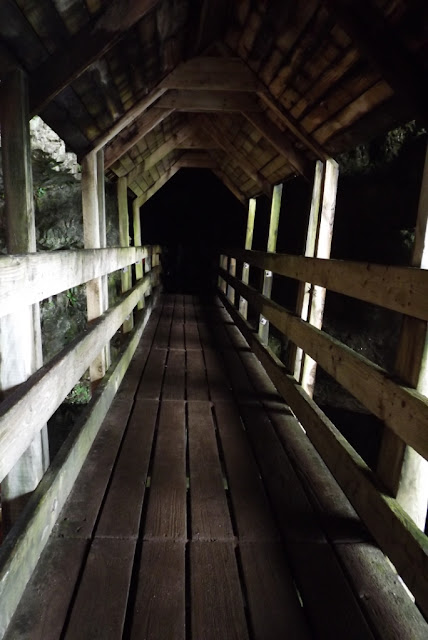 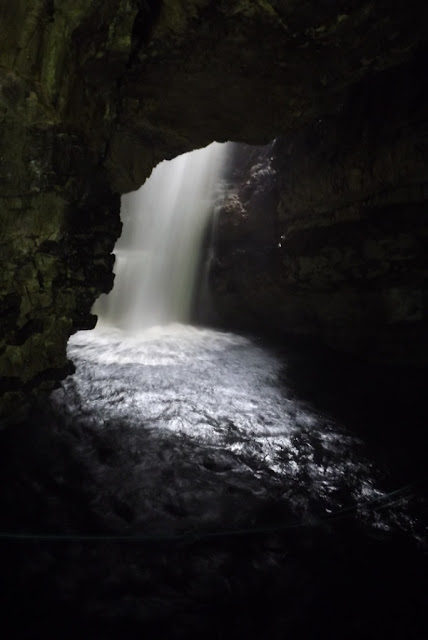 The second chamber is smaller, about 21m by 9m. The waterfall soaks you with spray when it's in full flow, and the darkness, dampness and deafening din create an assault on the senses that is powerfully disorientating. 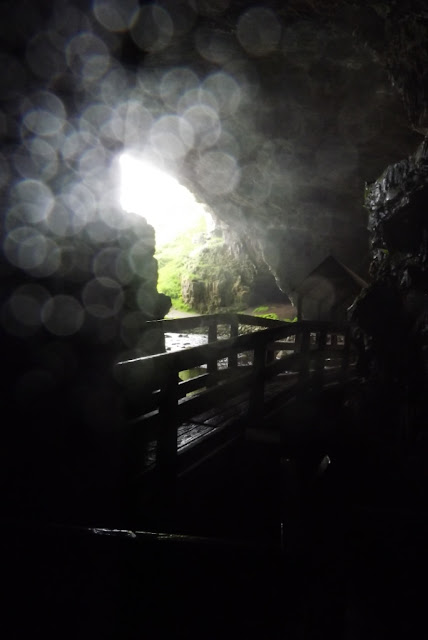 Neolithic, Norse and Iron Age artefacts found in an ancient midden in the main chamber suggest that the cave was inhabited throughout many periods of history. Anecdotally, even some proof of Mesolithic habitation has been found, although the physical evidence has since been lost. 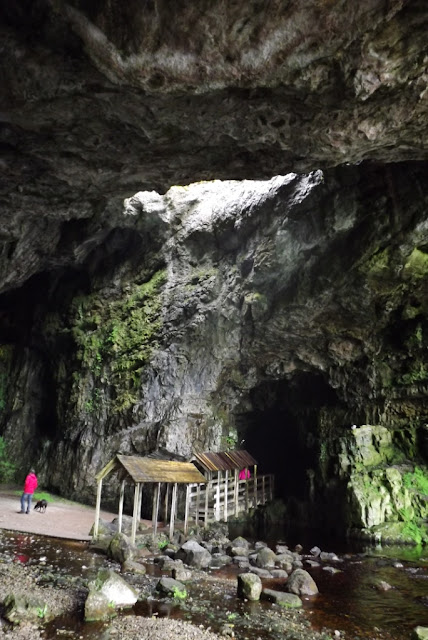 Smoo Cave has seen a lot of activity over the course of human history (and far more than we'll ever know), much of it unpleasant. 16thC highwayman McMurdo is said to have murdered his victims by throwing them down the blow hole into the main chamber of the cave. Grisly! 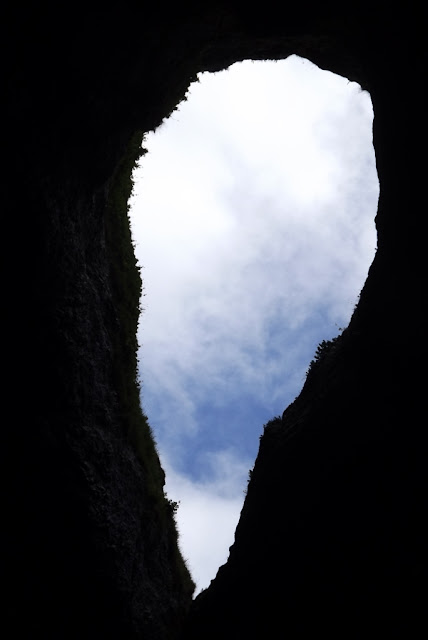 On the other hand, a wonderful but unlikely legend tells that a 17th C nobleman known as Donald, the Wizard of Reay, was involved in creating these same holes in the cave roof. Donald apparently met the Devil whilst on a trip to Italy and accepted his invitation to study the Black Arts. It was the Devil’s practice to claim the soul of one student from each class - always the last student to leave the classroom at the end of term. On finding himself the last to leave, Donald escaped by tricking the Devil into snatching only his shadow instead. When he returned to Scotland it was observed that he indeed cast no shadow. Furious at being tricked, the Prince of Darkness lay in wait for Donald in Smoo Cave. Our man Donald was heading into the cave just before dawn (why on earth, I wonder??). When his dog ran into the darkness ahead of him and returned to him howling and hairless, he was given cause to hesitate. It was just long enough for the sun to rise. Rendered powerless by the sun’s light, the Devil and the 3 witches who were with him escaped by blowing holes in the cave roof and flying away. So that's probably what happened then.... 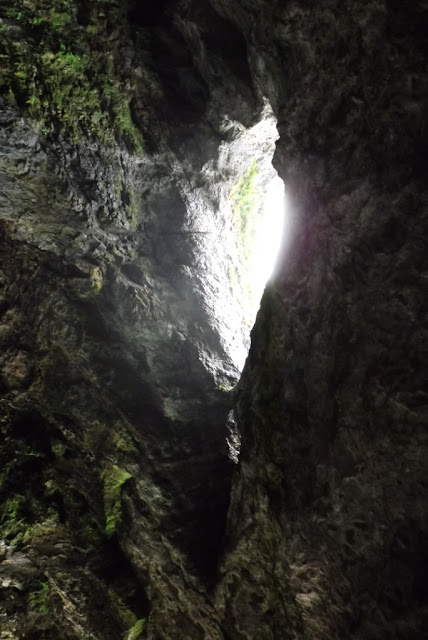 Sometime around 1720, the cave was the scene of a massacre. The Clan Gunn from the borders of Sutherland, having made a raid on the Durness area, were lured into the caves by local residents who pretended to seek refuge there. It was a trap, and the marauding clan were slaughtered to the last man. 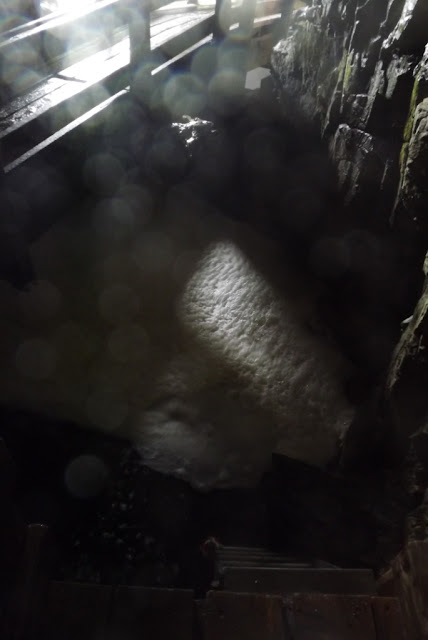 Two Inland Revenue officers were also murdered by 'accidentally' being drowned in the waterfall as they tried to search the caves for illicit stills in the mid 18thC. One of the bodies was never recovered, and the ghost of the lost man is said to haunt the waterfall, appearing in the foam stirred up when the water is at its highest and fiercest.

If anything, I’m surprised that there aren’t many, many more stories of the supernatural associated with Smoo Cave. It’s an extraordinary, quite uncanny place and the same can be said for the surrounding landscape, which is all white sands and black peaty soil, wild flowers dancing in the wind and strange rock formations cast in every shape of faeryland. It's a place that fills your soul with sweetest peace and darkest fear in equal measure.

The ideal way to experience Smoo Cave would probably be alone at night, by the light of an oil lamp or flaming torch, and with an overactive imagination!

A couple of random facts:

- The name ‘Smoo’ doesn’t in fact refer to smoke or spray from the waterfall, as might be assumed. It’s thought to derive from the Norse word ‘smjugg’ or 'sumvya', meaning creek or cleft.

- John Lennon spent many childhood holidays between the ages of nine and sixteen with his cousins at nearby Sangomore. I imagine he would almost certainly have visited Smoo Cave. He always had a great love and enthusiasm for this part of the country and it's said that this was what inspired fellow Beatle Paul McCartney to buy his farmhouse on Mull.